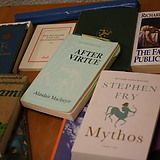 The Liberal Arts and Sciences Education and Core Texts in the European Context Conference took place at Amsterdam University College from Friday, 11 September to Saturday 12 September 2015. See here the VIDEO REPORT! The HKU-Chair Muzische Professionalisering (Professional Development & the Arts) also works with core texts in relation to (liberal) arts research and saw this conference as a great chance to get inspiration. Besides we foresaw to get new insights in working with core texts in a higher education context, we were happy to invest in the extension of our (international) relations and contributed with papers from two of our researchers. Besides one member of our research group was in the organizing committee of the conference.

Over the last century, European universities have evolved to become advanced research institutions, mainly offering academic training in specialized disciplines. The Bologna process that started in the late nineties encouraged European institutions of higher education to broaden their curricula and to commit to undergraduate education with increased vigor. One of the results of this development is that Europe is currently witnessing a proliferation of Liberal Arts and Sciences colleges and broad bachelor degrees.

Within this approach to undergraduate education, courses that involve core texts – i.e. classic texts from philosophical, historical, literary or cultural traditions – are gaining significance. Core texts, involving “the best that has been written” meet the challenges of modern higher education in a unique way. They not only develop the student’s philosophical, analytical, literary, and general reading skills, but they also suspend the concerns of the moment while opening up new normative, literary, psychological, philosophical, or political horizons. Core texts have the potential to draw students out of their intellectual comfort zone, challenging their own beliefs and opinions. As such, these texts constitute an important part of a genuinely liberal education.

The conference meant to bring people together who use core texts in one way or another in their courses, preferably in a liberal arts and sciences, broad bachelor, or comprehensive studies environment. A core text in this sense is any text that has stood or is likely to stand the test of time, from Plato to Derrida, from Homer to Dostoyevsky, from Augustine to Gandhi. The conference defined core texts in an inclusive way as any classic text that provides the foundation for a shared discourse whether from the Western or non-Western tradition, from ancient to (post-)modern time periods, and embedded in the humanities - philosophy, literature, history, and the arts – the social sciences – politics, anthropology, sociology, economics, and law – or the natural sciences – biology, physics, mathematics, etc. The conference invited reflection on questions about the meaning of a well-rounded liberal education, the role and meaning of core texts in European higher education, pedagogical aims, teaching pedagogies, assessment techniques, the selection of texts, core texts and big questions, and so forth.